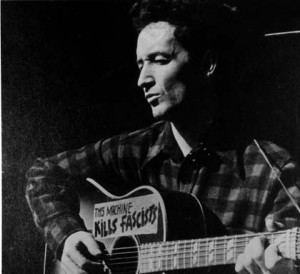 Woody Guthrie, a tribute to a voice against fascism and racism

“Woody Guthrie is the original folk hero,” according to his entry in the Rock and Roll Hall of Fame, one of a number of post-humous accolades. While Woody’s contribution to folk music is widely recognised, his contribution to the struggle against fascism and racism, which he saw as part of the wider struggle for the rights of working people, is less well known. The anti-fascist songs that Woody recorded during the war were not released at the time, some only being released recently, over 50 years later.

It is commonly acknowledged that Woody influenced many singers, most famously the young Bob Dylan, who emulated him and paid tribute to him in his Song to Woody Guthrie. His music has impacted on a new generation recently with the release of an album by Billy Bragg and Wilco, Mermaid Avenue, breathing new life into previously unheard lyrics.

Woodrow Wilson Guthrie was born in Okemah, Oklahoma, on 14 July 1912 into a family that was doing relatively well for itself. His father, Charles, was a cowboy, land speculator and local politician whose luck was to turn bad causing him to suffer financial ruin. Woody’s life was marked by tragedy. The death of his older sister, Clara, in a fire and the institutionalisation of his mother, Nora, devastated his family and home.

Okemah was an oil boomtown. When boom turned to bust and the depression hit in 1931 Woody left for Texas, where he married Mary Jennings and had three children, Gwen, Sue and Bill. Woody began his musical career by forming the Corn Cob Trio with Matt Jennings (Mary’s brother) and Cluster Baker. In 1935, when he was already finding it hard to make ends meet, the dust storm that hit the Great Plains forced him to move on in search of work. Woody headed for California along with thousands of other “Okies”. Whole families hit the road and the images of their “hard travellin’” are captured in Woody’s songs, the Dust Bowl Ballads, which are among the most popular he recorded. The migrant workers were dubbed “dust bowl refugees”, a term that Woody despised. Before introducing his song, Dust Bowl Refugees, he would say:

“You know, there are different kinds of refugees. There are people who are forced to take refuge under a railroad bridge because they ain’t got noplace to go, and there are those who take refuge in public office …”

The hostility towards the migrant workers by locals and the naked exploitation that Woody witnessed were to have a deep impact on him. On a personal level he enjoyed success in his music career, singing about social justice on Californian and Mexican radio stations with his singing partner, Maxine Crissman.

Guthrie’s songs became famous in California but he was restless and in 1939 moved to New York City. He hooked up with his friend Will Geer (who later played Grandpa Walton in the television series, The Waltons) and was embraced by the left and its vibrant music scene. Woody became friends with Huddie Ledbetter (Leadbelly), Cisco Houston, Burl Ives, Pete Seeger, Sonny Terry, Brownie McGhee, Josh White, Millard Lampell, Bess Hawes and Sis Cunningham among others. Together they sang in favour of the progressive political causes of the day. Woody and Will Geer sang at rallies and meetings in support of the Communist Party and Woody wrote a column for its newspaper, The Daily Worker. When pressed on the question of whether he was a member he answered, “I ain’t a communist necessarily, but I been in the red all my life”. It was during this period that Woody penned a true classic that has reached well beyond America’s shores, the song Union Maid.

In 1940 Woody recorded for Alan Lomax at the Library of Congress and throughout the decade for Moses Asch at Folkways Records. While Europe was gripped by fascism, Woody lambasted the USA’s homegrown fascists and Charles Lindbergh’s America First movement. Woody ended his song Lindbergh with the words:

“And I’m gonna tell you workers,
’fore you cash in your checks:
They say ‘America First’,
but they mean ‘America Next!’”

In 1941 Woody travelled to Portland, Oregon, to whip up support for a hugely ambitious rural electrification project. The Bonneville Power Administration was raising funds through public subscription to harness water power and employed Woody to record songs for a month. Woody waxed lyrical about the amazing sight of the Grand Coulee Dam and what electricity would bring to the rural Northwest. His recordings were played at meetings and rallies where people bought bonds to bring power lines over the countryside to their homes.

Woody was to sing numerous anti-fascist songs in the 1940s, especially with the Almanac Singers. The song Round and Round Hitler’s Grave confidently predicted the fascists’ demise. Woody has been credited with writing the verse:

“Mussolini won’t last long
Tell you the reason why
We’re a-gonna salt his beef
And hang it up to dry.”

The day after the song was broadcast on the This is War radio show in 1942 a New York newspaper ran a story headlined “Commie Singers Try to Infiltrate Radio”. Pete Seeger has said it was the last radio show that the band were offered as many of them went to war. In later years Seeger and other band members went on to form the Weavers, the most famous and influential US folk musicians of their day.

Woody served in both the Merchant Marine and the Army, going to sea on several occasions with his friends Cisco Houston and Jimmy Longhi. Woody used to sing to the troops on the ships and had confrontations with officials when he refused to sing to whites only. Woody was forever putting new words to old songs to make them fit the occasion. He rewrote his Dust Bowl ballad So Long it’s Been Good to Know You (Dusty old Dust) and made it an anti-fascist tune:

Woody was inspired to write a tribute to Ludmila Pavlichenko, a female lieutenant in the Red Army who shot dead more than 300 Nazis as a result of which she received a hero’s welcome when she visited the US. Woody tried to give an impression of the conditions that the Soviet sniper had to face when he sang Miss Pavlichenko:

“In the mountains and canyons quiet as a deer.
Down in the forests knowing no fear.
You lift up your sight and down comes a hun.
Three hundred Nazis fell by your gun.”

After working on a CBS radio show called Back where I Come From, which increased his fame, Woody wrote his semi-autobiographical account of his Dust Bowl years, Bound for Glory. Written in 1943 the book tells of his and his fellow unemployed workers’ journeys across the US by boxcar, thumb and foot.

The hypocrisy of “Jim Crow” racial segregation, in the wake of a war that was supposed to be fought against similar ideas, was highlighted by the brutal treatment of Isaac Woodward.

Singing new words to the tune of The Great Dust Storm Woody told the terrible story of this black soldier who, a matter of hours after receiving his honourable discharge in Atlanta, Georgia, was so severely beaten by racist cops that he lost his sight. Woody said of The Blinding of Isaac Woodward:

“I sang this song in the Lewisohn stadium one night for more than 36,000 people, and I got the loudest applause I’ve ever got in my whole life … I made this ballad up because we’ll need lots of songs like this one before we win our fight for racial equality in our big free United States.”

Woody’s marriage to Mary broke down during the war and he developed a relationship with a young dancer called Marjorie Mazia. They were married in 1946 and together they had four children: Cathy, who died aged four in a tragic accident, and Arlo, Joady and Nora. Woody composed children’s songs during this time, which were acclaimed and are still listened to and sung by young people today.

Woody’s health began to deteriorate, though he continued to write many songs. One song that stood out from the rest came about after Woody read, early in 1948, that a plane deporting migrant farm workers to Mexico had crashed. In Plane Wreck at Los Gatos (Deportees) Woody displayed his anger at the prejudice these people faced, even in death:

“The sky plane caught fire over Los Gatos Canyon
A fireball of lightning, and shook all our hills,
Who are these friends, all scattered like dry leaves?
The radio says, ‘They are just deportees’.”

Woody’s as yet undiagnosed illness brought tensions in his personal and professional life that spurred him to leave his family and head for California with his friend “Ramblin” Jack Elliott. In California Woody met Anneke van Kirk, whom he married. They had a daughter, Lorina Lynn.

Woody’s health continued to decline and he returned to New York where he was eventually diagnosed as suffering from Huntington’s Chorea, the same degenerative disease that had institutionalised and destroyed his mother some 30 years earlier. In 1954 Woody admitted himself to a New Jersey hospital, the first of several that he would be in and out of for the rest of his life. While at Creedmoor State Hospital in Queens, New York, Woody Guthrie died on 3 October 1967.

Woody left a rich legacy, one that is woven into the fabric of the USA. Like Joe Hill before him he understood that, “a pamphlet is never read more than once but a song is learned by heart and repeated over and over”. The single song that stands as his testament is This Land is Your Land, which has become the unofficial anthem of the USA.