Who killed my brother? 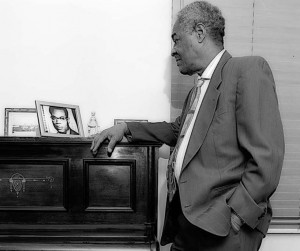 The murder of Kelso Cochrane on Saturday 17 May 1959 became one of the most significant moments in the history of racism in Britain. Stabbed to death by a gang of racist white youths, Cochrane was killed in a strikingly similar way to Stephen Lawrence in 1993. In both cases there was a conspiracy of silence that protected his murderers, but of course Stephen’s name remains well known while Kelso’s has largely faded from public memory.

That is why last month’s BBC2 documentary Who Killed my Brother? was so welcome. The black and white footage of the Notting Hill area of west London was a grim reminder of some of the worst aspects of 1950s Britain, a far cry from the chic Notting Hill made famous by Hugh Grant and Julia Roberts nearly 40 years later in the 1999 film of that name.

Kelso Cochrane was an Antiguan who came to Britain in 1954 and settled in Notting Hill, where he worked as a carpenter. He was saving money so that he could eventually study law. Rejecting the opportunity to live in the USA when he was offered residency there, he made Britain his home.

While at work Kelso fractured his left thumb. Come the weekend, his arm in a sling, he found himself in severe pain. So, after a sunny Saturday spent at Portobello Road Market and Hyde Park with his fiancée, a nurse, that evening Kelso went to Paddington General Hospital to get his thumb looked at again and some pain relief. He was given pain killers and made his way home. Just a short distance from where he lived, he was attacked by five to seven white youths and stabbed in the heart. He died in hospital a short while later.

The Notting Hill area had become notorious following “race riots” eight months earlier in 1958. Because of this, Kelso’s killing was to become national news and a hot political issue. Some 1,200 people, black and white, turned out for his funeral.

One man could not make the funeral. Back in Antigua, Kelso’s brother Stanley, who had paid for Kelso’s trip to England, did not have enough money to come himself. Who Killed my Brother? is the story of Stanley’s journey to London this year in search of the truth about what happened the night his brother died.

Nobody has ever been tried for the murder. Stanley spoke to people close to Kelso at the time and with the TV researchers delved through archive material. He returned to Antigua with a better understanding of what happened but still a lot of missing pieces. Kelso’s clothes had been destroyed in 1968 making advances in forensic technology that might have secured a conviction useless in this case. Searchlight cooperated with the police cold case murder reinvestigation team and the BBC researchers in tracking down potential witnesses.

In a pattern to be repeated all over Britain following other racist killings, the police at the time were quick to claim Kelso’s murder was not racist. This was almost certainly a misguided attempt to ensure calm in the area. The reason behind this was a belief that the sentencing of white youths to four years’ imprisonment for attacking black people had exacerbated tensions before the 1958 riots. In reality that was a rare conviction for what had been regular “nigger hunting expeditions”. It has also been suggested that the police were worried about the repercussions as in those days a conviction for murder would have meant a hanging.

Of course, like moths to a light bulb, wherever there is a possibility of racial tensions, the fascists were active. Oswald Mosley’s Union Movement targeted the Notting Hill area and many blamed it for whipping up racial hatred. There were no laws against inciting racial hatred at the time, which gave racists and fascists a free hand. Feeling the heat in the wake of the murder, Mosley issued this statement on the following Tuesday:

“On May 17 a negro was reported murdered in the Notting Hill district. The next day some daily papers suggested that this was due to racial tension and that I was responsible on account of my prospective candidature, although I had just circulated to every house in the area to settle the question by ‘votes not violence’ …”

Mosley said one thing and did another. He went on to hold a meeting on the very spot where Kelso was murdered. Who Killed my Brother? interviewed John Bean, a man once described as “the British Goebbels”. Bean was one of the best known Union Movement activists at the time; he is currently editor of the British National Party magazine, Identity.

Most interesting of all was a key local Union Movement activist, Peter Dawson. A Notting Hill resident, Dawson joined the organisation in January 1959. While never a suspect in Kelso’s murder, Dawson claimed to hold a vital piece of information.

On 24 September 1961 the Sunday People ran an exposé of Dawson under the headline “Britain’s Biggest Bully Unmasked”. Talking about Kelso’s murder, Dawson told the reporter, Ken Gardner: “It was one of the Union mob … A great guy. Did it to teach the other nigs a lesson. But none of us in the movement would tell the police a thing.”

Dawson was an unsavoury character even by fascist standards. The article described him as a “Housebreaker, thief, [and a] strong-arm man. Just the man for Mosley, who appointed him West London area organiser for the Union Movement.”

Dawson played a leading role in Mosley’s electioneering in Notting Hill. During the run-up to one election he was fined £10 for throwing a home-made smoke bomb into the window of a car. It was reported that he had “inflamed a crowd [at a meeting] against a group of white girls standing with their coloured boyfriends”.

On 31 December 1959 Dawson allegedly daubed the slogan “Juden raus” (Jews out) three times on the wall of Notting Hill Gate synagogue with swastikas between the words. Then he slipped back to the office to make anonymous phone calls to the newspapers. The Association of Jewish Ex-Serviceman formed a group to guard synagogues, but in an attempt to discredit them Dawson placed a home-made bomb just outside the Union Movement headquarters. By its side he painted a Star of David.

In July 1960 Dawson was involved in a disturbance outside the Ritz Hotel where Patrice Lumumba, Prime Minister of the Congo, was staying. Dawson was sentenced to three months’ imprisonment for using threatening behaviour whereby a breach of the peace might have been occasioned. According to the prosecution Dawson mistook the High Commissioner for Ghana for Lumumba and hit him in the face.

Dawson also sent fascist literature as a wedding present to Princess Margaret. Soon afterwards he organised a protest march outside the Pigalle Restaurant against the black American singer Sammy Davis Junior, who had recently married a Swedish woman, Mai Britt. He also boasted of putting a flaming cross on the railway bridge at Notting Hill Gate. “That put fear into the local blacks. They thought the Ku Klux Klan had arrived to burn them at the stake.”

Dawson was for a time the circulation manager for Union Movement’s Action newspaper. He was finally expelled from the organisation after an arson attack for which he was acquitted.

The programme makers tracked down Dawson in the hope of getting him to talk on camera but to no avail. If he does know who killed Kelso, to this day he will not say.

A prime suspect was a local young man who had been released from prison two weeks earlier. John “Shoggy” Breagan was notorious in the area for his violent racism towards black people which had led to his conviction. The trial judge referred to this hatred which combined with drink had led him to attack three black men with weapons including a knife. Breagan had attended the drinks party from where the men who attacked Kelso had come. Despite a lengthy police interview Breagan was never charged. Although Breagan agreed to meet Stanley, his front door remained firmly shut when Stanley turned up. In an angry phone call to the BBC he denied any knowledge of the murder.

Colin Jordan’s White Defence League, which had its national headquarters in nearby Princedale Road, was also very active in the wake of Kelso’s murder. Jordan prided himself that his organisation was even more nazi than the Union Movement. Less than a month after the murder he issued a pamphlet laden with conspiracy theory entitled Who Killed Kelso Cochrane? It said:

“The people behind the coloured invasion are getting desperate because of the growing white resistance in Notting Hill. Reds are forming strong-arm squads in support of the blacks. Jews have threatened to destroy the premises of the White Defence League. Now they are using the killing of a coloured man to:

Was Cochrane’s killing arranged for this foul purpose?”

Interviewed on camera an ageing Jordan claimed with nostalgic bravado that his people operated unhindered from their Notting Hill premises. But Searchlight knows different. On one occasion three years after Kelso’s murder, the building, which had by then become the headquarters of the National Socialist Movement and was only open at weekends, was attacked by anti-fascists and the furniture and contents turned upside down while members of the nazi “master race” cowered inside.

The racist “nigger hunting” attacks in Notting Hill in 1958 and the murder of Kelso Cochrane the following year produced a strong response from anti-racists that was to have a lasting effect. Today in Notting Hill, every August, black and white people celebrate in one of the biggest street festivals in the world. Few know that the carnival was originally organised by anti-racist activists, under the tutelage of activist Claudia Jones, as a way of combating racism by celebrating Caribbean culture.

Kelso’s death and the wider racist climate in which it took place eventually led to the first Race Relations Act in 1965, after several years of campaigning. Among other things, stirring up racial hatred, “incitement”, as had happened with impunity in Notting Hill, became a criminal offence in Britain for the first time.