The Battle of Cable Street 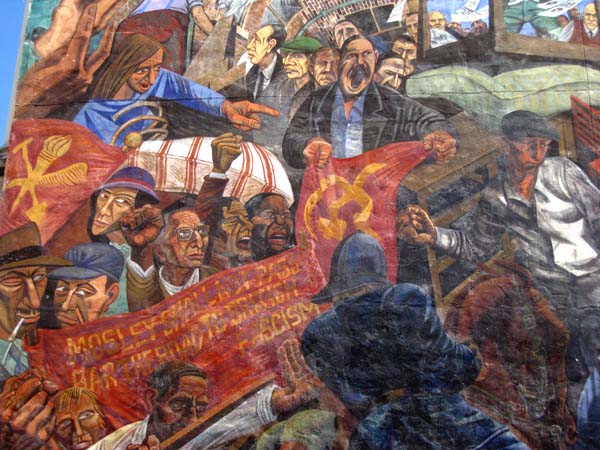 Yesterday I found myself at the Cable Street mural in London’s East End and took a bunch of photos, one of the details of which I have posted above. The mural itself has an interesting history, which you can read about here.

The great anti-fascist victory of 4 October 1936 – when the fascists were prevented from marching though the then largely Jewish districts of the East End of London – only came to be widely known as the “Battle of Cable Street” some decades later. Perhaps the greatest contribution to this happening was the screening of a documentary on BBC2 in January 1970 called The Battle of Cable Street.

As far as I am aware the documentary has not been repeated on television. However, there are a few copies floating around and recently I got to watch it again. It is interesting to see one of main protagonists of the day, Phil Piratin, give what by then had become the official communist perspective on the day. Piratin was elected as a Communist MP for Mile End with his anti-fascist activities, including on 4 October 1936, being a major contributory factor to his success.

Of course there are numerous other interesting people in the programme. Oswald Mosley, the fascist leader, also appears in the documentary as does one of London’s great historians of the East End, Bill Fishman and Edith Ramsay, a well known and highly regarded East End social worker.

The documentary was directed by Michael Rabiger, who went on to make a significant impact on the way that documentaries were made internationally . It was part of a series called Yesterday’s Witness, which popularised television “history from below” and pioneered oral history on television.

The producer, Stephen Peet, was blacklisted by MI5 due to the activities of his brother, John Peet, who had fought in Spain with the International Brigades and went to live in the German Democratic Republic as an enthusiastic and active supporter. I will be writing more on these themes here soon…

2 Responses to The Battle of Cable Street