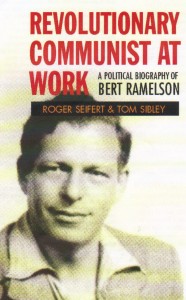 I’m very much looking forward to getting my hands on a biography of former Communist Party of Great Britain industrial organiser, Bert Ramelson, that is coming out soon.

Titled Revolutionary Communist at Work: a political biography of Bert Ramelson by Roger Seifert and Tom Sibley, the book looks like it will be as fascinating as the man himself.

The information below is from the 21st Century Manifesto website.

Revolutionary Communist at Work: a political biography of Bert Ramelson by Roger Seifert and Tom Sibley

Bert Ramelson (1910-1994) was a remarkable man who lived through remarkable times. Born into a Jewish ghetto in pre-1917 Ukraine, he went on to become Britain’s foremost communist during the turbulent years of industrial strife in Britain in the 1960s and 1970s. He lived through the first years of the Bolshevik revolution and the ensuing Civil War – during which members of his family were murdered in the anti-Semitic pogroms of the period. After a short spell in Palestine working on a Kibbutz, he fought in the Spanish Civil War as a member of the Canadian contingent of the International Brigade, and then as a tank commander with the British Army in the Second World War. Having been taken prisoner at Tobruk, Ramelson went on to lead a mass breakout from an Italian Prisoner of War Camp.

From 1937 onwards, Ramelson lived as a professional revolutionary. After the war he spent nearly twenty years as a full-time Communist Party worker in Yorkshire, but it was his appointment as the Party’s National Industrial Organiser in 1965 that brought him to national prominence. During this period he received the accolade of being named by prime minister Harold Wilson as the most dangerous man in Britain. As well as playing a leading role on the industrial scene, Ramelson was also centrally involved in the leadership of the Communist Party, where he played a key role in many a stormy debate – including taking the lead in confronting the Soviet authorities when he denounced their 1968 invasion of Czechoslovakia.

Read an extract from the book

‘Bert Ramelson is best known as the Communist Party’s industrial organiser during the days of the Wilson, Heath and Callaghan governments. With others on the left he helped to develop a mass movement based on organised workers which was strong enough to block anti-trade union legislation and protect workers’ rights. We badly need such a movement today, with an even broader canvas. Much can be learned about how to do this from studying Bert’s life.‘ Rodney Bickerstaffe, former TUC President

Roger Seifert is currently Professor of Industrial Relations at Wolverhampton Business School. Previously he worked for Incomes Data Services, before joining Keele University, where he was made Professor of Industrial Relations in 1993. He has written widely on public sector industrial relations, as well as on the NHS, schools and FE, local government, the civil service, and the emergency services.

Tom Sibley was a full-time worker for the CPGB in the late 1970s and early 1980s. For many years he was Head of the TASS and MSF Research Departments before taking up a position as General Secretary of The International Centre for Trade Union Rights. In 2008 he was awarded a PhD for his dissertation on the impact of anti-communism on the labour movement during the early years of the Cold War.

This entry was posted in Blog and tagged Bert Ramelson. Bookmark the permalink.