From inside the madness

Hate: My life in the British far right 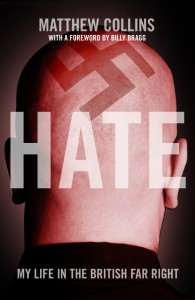 HATE tells the story of Matthew Collins’ epic journey and transformation from fascist bully-boy to his redemption as a mole for the investigative anti-fascist magazine Searchlight.

Collins is not the first and won’t be the last young man to have become involved in a fascist movement and then realised later that it was a mistake. Most walk away and get on with the rest of their lives.

What is exceptionally rare though is for that person to make a decision to stay inside and pass as much information as possible to the opposition. Discovery could come at any time, unleashing some of Britain’s most violent thugs on the turncoat in their midst.

Hate is a disarmingly and brutally honest account of Collins’s active involvement in the National Front and the British National Party in the 1980s and ‘90s. No punches are pulled in the description of some of the violence that he found himself involved in.

It is also a story of a young man growing up on a South London council estate trying to come to terms with who and what he is.

It is a tale told with humour with nothing left sacrosanct.

A chain of events leads Collins to view his understandable sense of frustration of abandonment as a working class youth in Thatcher’s Britain through the distorting prism of race.

Through Hate we get to meet some of the key figures in Britain’s nazi movement over recent decades.

People like the BNP’s Richard Edmonds, a former school teacher, who explained to Collins that the murder of 6 million Jews in Europe did not happen. Nazi was not just some label opponents put on the man. When Edmonds was arrested for daubing the Nelson Mandela statue on London’s South Bank he sat in his cell singing the Nazi Horst Wessel Lied until he was hoarse.

There was much crossover between the BNP and the NF and Collins filled many an hour at the house of NF Chairman Ian Anderson, who operated a semi-industrial scale printing operation from a shed in his back garden.

The reader is also introduced to Nick Griffin, John Tyndall and numerous other lesser known characters from the dark recesses of the extreme-right.

Collins was deeply enmeshed in the fascists’ world of bedsit weirdoes, cranks and violent crackpots when his transformation occurred and he started tentatively passing information to the anti-fascist organisation Searchlight. Eventually he became Searchlight’s most important mole of the period.

The book does not make comfortable reading. Collins could easily have swept some of the more unsavoury goings on that he was personally involved in under the carpet. The fact that he didn’t makes for some pretty shocking reading as he readily admits that he was no innocent bystander.

Working for Searchlight, Collins became close to the most violent section of the fascist movement – Combat 18 – when they discovered that he was their mole. The bravery and the risks involved in staying inside to expose these people is staggering.

Then suddenly it was all over. The man who, with his comrades, once struck fear into the hearts of the enemy became the enemy himself.

The account of Collins’ sudden getaway makes gripping reading as he left Britain in a hurry. It would be some years before the passage of time allowed him to return, this time openly as a full-time anti-fascist for Searchlight.

A foreword by veteran folk singer and fellow Hope not Hate campaigner Billy Bragg shows the high esteem that Collins is held in by his anti-fascist comrades. Together they successfully spearheaded the recent campaign to defeat the BNP at the ballot box.

Much has been written by pundits about the BNP and their ilk, but for anybody who wants a real insight, from the inside, then Hate is the place to start.

One Response to From inside the madness