76th Anniversary of the Battle of Cable Street 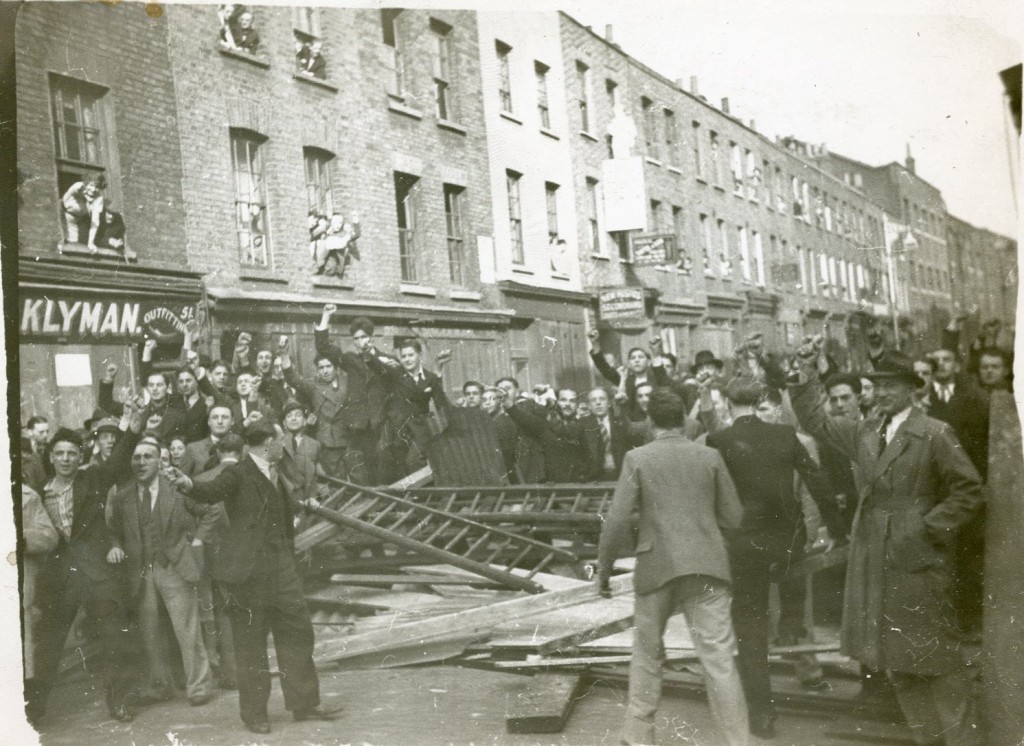 Today marks the 76th Anniversary of the Battle of Cable Street. Below is an article that I had published last year in a Searchlight Educational Trust publication and in Jewish Socialist Magazine.

THE GHOSTS OF CABLE STREET
By Steve Silver

My maternal grandfather, Hymie Hertz, was born at 111 Cable Street, in June 1914. He lived in the flat above his father’s bakery; in total they were a family of nine. He was there for 24 years, moving out in 1938 when he married my grandmother, who he first met at a Young Communist League dance.

Naturally, I grew up with my “Poppa” telling me of that great day on 4 October 1936 when the fascists were routed in the East End. This wasn’t the sort of history that you learned in school: of a barricaded street, of people throwing things out of the windows onto the police and of marbles being rolled under horses’ hooves.

But most of his stories were about growing up in Cable Street. He lived near the Cable Picture Palace, a flea pit cinema that was nevertheless very popular, by the junction of Christian Street.

Opposite was a square where they used to play football. Except some of the times when they were playing football they were meant to be in cheder (Hebrew class). The rabbi would come out and drag the footballers into class and chastise them in Yiddish, unaware initially that while those whose surnames were Abrahams, Levy and Isaacs might need the lesson for their forthcoming bar mitzvahs, the Kelly’s and Donnelly’s probably didn’t.

It would be easy to feel sorry for the rabbi. He taught in a small room with an open fire. One day, when the rabbi’s back was turned one of his pupils threw a string of firecrackers into the fire. Unaware of where the sudden barrage of loud popping noises was coming from, he hopped around the room, cursing in Yiddish, while his ungrateful pupils giggled.

In 1982 my grandfather died, and my rich source of stories about Cable Street went with him.

I probably didn’t hear much about Cable Street for a few years. Then in 1986, while I was president of my college students’ union, a magazine came in the post that grabbed my attention. It was the October edition of the anti-fascist publication Searchlight, which had been sent by the National Union of Students to every affiliate in Britain.

This wasn’t just any edition, the cover and the centre four pages were devoted to the 50th Anniversary of the Battle of Cable Street. There were interviews with veterans Mick Mindel, Jack Shaw, and Charlie and Joy Goodman. The magazine was heavily illustrated with photos and brought alive what happened that day. I was already involved in anti-racist activity, and here, the pages of the magazine brought the past and the present together.

I got in touch with Searchlight shortly afterwards, within months I was volunteering and totally immersed in anti-fascism. I have had a connection with Searchlight, in one way or another, ever since.

Unsurprisingly, I was delighted when Searchlight asked me if I wanted to put together a pamphlet to mark the 75th anniversary. The first thing I did was to thumb through my old October 1986 magazine for inspiration.

When I found out that there were five new books coming out relating to the Battle of Cable Street I knew that they had to be reviewed in that publication. None of them quite ready for print yet, they were all sent to me electronically.

Roger Mills emailed me his book, Everything Happens in Cable Street. I read a bit of it, found it enthralling and then sent him an email to thank him. There were all sorts of connections with the street that I had never known about. It was great stuff.

A GHOST OF CABLE STREET

I was going to shut the computer down but instead I carried on reading. There were some interviews that the Cable Street Group had carried out in the 1980s and I found myself reading one with Gertrude Jones, a woman who had lived above her parents’ bakery in Cable Street.

“That’s funny,” I thought, my grandfather lived above his father’s bakery. I was already aware of at least one other bakery in that western “Jewish” end of the street. David Rosenberg, the author of another of the books I was set to review, had told me that Battle veteran Aubrey Morris’s grandfather had a bakery at 86 Cable Street so I wasn’t that surprised to learn of yet another. “They must have been rivals,” he said at the time.

As I was reading, I came across the following words, “…my surname was Hertz.” It took a few minutes to process what I was reading. The name Gertrude Jones had meant nothing to me. Then I realised. I was reading an interview with my grandfather’s sister, my Auntie Gertie. I hadn’t recalled her married name.

I didn’t know that in 1988 she had responded to a letter written to the Jewish Chronicle by Jil Cove on behalf of The Cable Street Group which opened with the words: “Did you ever live in or near Cable Street?”

When I read one of the other forthcoming books, The Battle of Cable Street, which is actually an updated reprint, I came across another part of the same interview. Funnily enough I had reviewed an earlier version for Searchlight, in October 1996, but as it only referred to Mrs Jones, I had no idea I was reading an interview with a member of my own family at that time.

As I read her words again the stories that my grandfather told me came back to me as vividly as ever: “We had to board the shop with shutters and stay above it, ready to throw things down on them. The non-Jewish people surrounding us said ‘You’re hard working people and you don’t interfere with anybody. You’re nice families and we’re going to see that he doesn’t get through Cable Street.’ And they gave us things to throw at them – bricks, knives, lumps of wood, anything.”

The song, The Ghosts of Cable Street, by The Men they Couldn’t Hang, now had new meaning for me.

I have no doubt that the memory of The Battle Cable Street will live on. As I got enmeshed in the forthcoming anniversary I found myself somehow being pressganged into being one of the organisers of the march and rally this year. Several other grandchildren of Cable Street veterans wrote in to our committee’s email, who also felt a personal connection and were keen to keep the memory of the events alive.

One of them is the granddaughter of Charlie Goodman, who Searchlight interviewed in 1986. She was looking for a photo of his arrest that day which we have located for her.

It wasn’t only in connection with my own family that I found a surprise from the past. When I interviewed Dan Jones, at his house in Cable Street, he talked about his background and his father, Frederick Elwyn Jones, who had a distinguished career as a Labour politician. He had been Attorney General in Harold Wilson’s government in the 1960s, and was later made a life peer. The most interesting thing from an anti-fascist perspective though was that he had been junior British Counsel during the prosecution of leading Nazis at the Nuremberg Trials.

Before I left, Jones showed me some of his artwork, much of it with an anti-fascist connection. He also showed me some work done by his mother, Pearl Binder, who was a fascinating woman in her right.

Some weeks later, when I was writing something on Mosley’s notorious Olympia meeting of 1934, I found an eyewitness account from none other than Pearl Binder. As Jones has been a lifelong anti-fascist I was sure he would have known about his mother being there. I emailed him to let him know what I had found and to check that the address tallied and it was one in the same person. His response was “Oh blimey, like so much of my Mum’s life and activities this is another interesting area that she didn’t talk about and no I had no idea that Mum was at Mosley’s Olympia fracas. Please send us the reference.”

Her account is a useful glimpse into what the anti-fascists at Cable Street helped prevent from ravaging Britain as it had the rest of Europe:

“I saw several Blackshirts using knuckledusters near me in attacking hecklers. I saw male Blackshirts attack women who interrupted, and a man brutally thrown out who had just stood up in his seat and not even spoken… In the corridors the police were beginning to arrive. There were several injured lying in the corridor; one, with a badly-broken head, was barely conscious.”

It will not be many years before there are no veterans of 4 October 1936 left. Today’s generation of anti-fascists has been entrusted to retell the story of the historic defence of the Jewish community of the East End of London. Long may it provide inspiration to anti-fascists everywhere – No Pasarán! They Shall Not Pass!

This entry was posted in Blog and tagged anti-fascist, Antisemitism, Battle of Cable Street, Mosley, nazi. Bookmark the permalink.