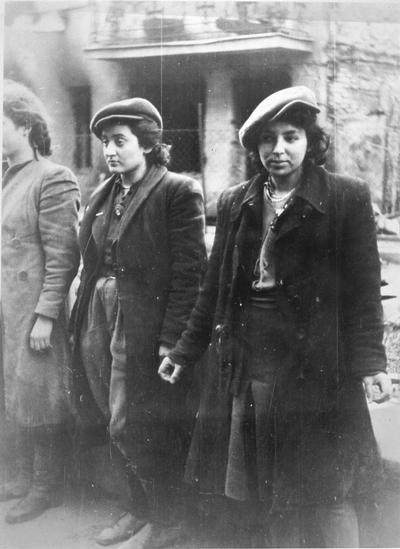 This month marks the 70th anniversary of the Warsaw Ghetto Uprising. It is the most symbolic and well-known act of anti-fascist resistance ever to take place. The Ghetto fighters have entered the annals of Jewish martyrdom, but the lesson of their courage is universally inspiring and timeless. This is an article I originally wrote to mark the 60th anniversary.

The formation of the Ghetto
The Warsaw Ghetto was created in November 1940, a year after the Nazi invasion of Poland. Housed within its walls were the city’s Jews, who comprised nearly 30 per cent of Warsaw’s population. As Jews from smaller towns were rounded up by the “Einsatzgruppen” and forced into the Ghetto, its numbers swelled to nearly half a million people. Conditions inside the Ghetto were horrendous. After 18 months of incarceration some 63,000 Jews had died due to the hunger, disease, overcrowding and cold.

The Ghetto was internally controlled by the Judenrat – Jewish Council – which was set up by the Nazis to carry out their instructions. The Judenrat included people who tried to help Jews who were suffering from the harsh Ghetto conditions, but also had members who would attempt to save their own skin by any means, with little regard for their community. A Jewish police force, which was notoriously brutal, was used by the Judenrat to enforce Ghetto “law” internally. Antisemitic Polish “Blue” police guarded the Ghetto. There was also an independent police force that served to gather intelligence for the Gestapo, though this was later absorbed into the main force. The Judenrat came to be regarded with contempt by the populace, as the conditions in the Ghetto worsened, and was nicknamed the Judenverat (Jewish betrayal).

During November 1941 news reached the underground in Warsaw of mass killings of Jews following the German invasion of the Soviet Union in summer that year. Communal leaders also heard reports of an extermination camp at Chelmno, where Jews were being gassed to death. However, finding the information almost unbelievable and not wanting to destroy morale, they left the Ghetto inhabitants uninformed.

Attitudes towards resistance changed dramatically in the summer of 1942, when, through the Judenrat, the Nazis decreed: “All Jewish persons living in Warsaw, regardless of age and sex, will be resettled in the East …”. Hundreds of thousands of Jews were deported to the Treblinka extermination camp that summer. In July 1942, at the initiative of the Zionist youth groups, a meeting was held which formed the Zydowska Organizacja Bojowa (ZOB – Jewish Combat Organisation). The ZOB’s political wing consisted of the various Zionist organisations and the communists. In October the Bund (Jewish Socialist Party), Poland’s largest Jewish organisation, joined as well. Only the extreme Jewish nationalists did not participate; instead they decided to fight separately as the Irgun Zvai Leumi (Jewish Military Union).

Within a few weeks the ZOB had drawn up by-laws, describing the purpose of the organisation as being the defence of the Ghetto against further deportations and collaborators.

The first action to be carried out by ZOB stamped its authority on the Ghetto when it executed Jacob Lejkin, chief of the despised Jewish police, on 29 October. A number of other assaults were also carried out on the most notorious of the Ghetto’s inhabitants, securing enthusiasm for the underground organisation.

During the winter of 1942/3 underground bunkers and secret hiding holes were constructed throughout the Ghetto, while ZOB attempted the difficult task of securing weapons. Some were obtained from the black market and from German and Italian deserters, but at a high price. A small quantity of arms was acquired from the Polish resistance (Home Army), which operated under the instructions of the Polish government in exile, based in London. Supply from the Home Army was limited because of a combination of antisemitism and fear that the weapons might be used in the future on the Soviet side in the event of a war between Poland and the Soviet Union. More arms were delivered once ZOB had proven itself as effective, but in total they only ever made up 10% of the ZOB arsenal.

Fighting back – defending the Ghetto
German troops surrounded the Ghetto on 18 January 1943 in an attempt to deport the last of Warsaw’s Jews. Even though they were taken by surprise, five ZOB units engaged the troops and killed or wounded some 50 Germans, seizing weapons in the mêlée. ZOB casualties were high, but after three days the deportations were halted.

The Ghetto became a honeycomb of underground passages and hiding places, with the ZOB in control. The ZOB levied taxes on those who still had money, maintained a “prison” for Gestapo agents and nontaxpayers and carried out raids on banks to secure money for arms. After the losses in January the ZOB was divided into 22 units of ten combatants, organised by political party. The Zionist youth made up 11 units, the Bund and the communists controlled a further four units each and other Zionist groups had three units. There was still an acute shortage of arms. Mordechai Anielewicz, the young left-wing Zionist and ZOB commander, wrote:

“If we could only get the weapons and ammunition we need, the battle for the Ghetto would cost the enemy an ocean of blood. But even so, we shall prove the power of our faith and the confidence in our strength.”

In February 1943 five Gestapo agents were shot, and the ZOB issued a warning to others that unless they quit, they too would share the same fate. In the same month the Germans tried to evacuate factory workers in the Ghetto, encouraging “voluntary resettlement”. ZOB propaganda was so successful in encouraging people not to turn out for “evacuation” that the Germans asked the Judenrat chairman to intervene. He replied: “I have no power in the Ghetto. Another authority rules here.”

The Ghetto revolts
On the eve of Passover – the Jewish festival of liberation – the Ghetto uprising began. It was 6.00am on 19 April 1943 when 2,000 men, including Waffen SS, Wehrmacht, Latvian, Lithuanian and Ukrainian fascists, supported by units of the Polish “Blue” police, advanced on the Ghetto, the area of which was now less than 1,000 by 3,000 metres. Under the orders of Heinrich Himmler, the fascist forces were to carry out the final liquidation of the Ghetto.

With the civilian population underground in prepared bunkers, the 22 ZOB combat units took their positions. Some were in the central Ghetto area and others in the factories. As the fighting proceeded they were joined by the Irgun and other unaffiliated units.

ZOB units attacked the fascists – who were led by SS Lt General Jurgen Stroop – with guns and homemade petrol bombs. Stroop had expected little resistance from those he had described previously as “this Jewish trash and subhumanity” who are “cowards by nature”. His report for the day was to tell a different story:

“Hardly had the operations begun then we ran into concentrated small arms and machine-gun fire from the Jews and bandits. Our tanks and two armoured cars were pelted with Molotov cocktails. Owing to the enemy counter-attack we had to withdraw … Our losses in the first attack: 12 men. By 5.00pm the troops withdrew having lost in fact some 200 dead and wounded.”

The next day, 20 April, Waffen SS reinforcements entered the Ghetto and were bombarded with grenades and explosives. In one incident alone an electric mine killed some 100 Germans. They responded with tanks and field artillery and began setting fire to Ghetto buildings. ZOB replied by burning down the warehouses of the agency in charge of expropriated Jewish property. Despite the fire and smoke, which began to envelop the Ghetto, morale was high. On one roof the Jewish blue and white banner flew alongside the red and white Polish flag. On another roof a banner stated, “We shall fight to the last”.

“They jumped from burning windows and balconies, abusing Germany and the Führer … over and over again, we observed that the Jews and bandits preferred to return to the flames rather than be caught by us.”

The Ghetto held out into May. Zivia Lubetkin, one of the few ZOB survivors of the epic battle, recalled. “We sat in the dark, scores of Jewish fighters, still carrying our weapons, surrounded by thousands of eager and expectant Jews. Was it not May Day? … How grave the responsibility we felt as the last desperate Hebrew warriors! We could not hold out against the Germans’ consuming fire for long without water or food or weapons.”

It was a battle that the Jews could never have won, no matter how heroic the resistance. The ZOB headquarters was surrounded on 8 May, after three weeks of combat. Over 100 fighters were inside. The Germans blocked the entrances and sent gas into the bunker. The fighters decided to kill themselves rather than be taken alive. ZOB Commander Anielewicz was among them. During the revolt he wrote:

“It is now clear to me that what took place exceeded all expectations … The last wish of my life has been fulfilled. Jewish self-defence has become a fact. Jewish resistance and revenge have become actualities. I am happy to have been one of the first Jewish fighters in the Ghetto.”

Two days after the end of the battle, 75 ZOB survivors crawled through Warsaw’s sewers. They escaped with the help of comrades in the resistance on the outside of the Ghetto. Of Warsaw’s 350,000 Jews, few were to survive the war. Of Poland’s 3.3 million Jews, only 50-70,000 were to remain alive.

This entry was posted in Blog and tagged anti-fascist, Antisemitism, fascism, nazi. Bookmark the permalink.