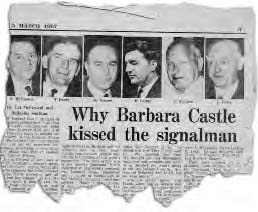 This year marks 70 years since Alex McFadden joined the union. During his long career he became a leading local and national figure, representing the union in negotiations with national government.

“My family on my mother’s side were very political. I had an uncle that fought in Spain,” recalls Alex McFadden as he reflects on his formative political experiences during the 1930s. Alex came from a Catholic family but rejected the Church, not least because of its support for the leader of the Spanish fascist Falange, General Franco. With fascism on the rise across Europe and high unemployment in the North East – where Alex grew up – it was not difficult to become politicised.

Alex was a member of the Communist Party but left the party in the 1950s. Alex joined the Labour Party, and was active there as well as in the Northern TUC, where he played a leading role for many years. He was to eventually resign his Labour Party membership many years later, disappointed that in government the party presided over public sector cutbacks that hit the working class very hard.

Alex joined the union – then the NUR – in May 1940, starting out his career on the rails in Gateshead at the age of 17 as an engine cleaner, later to become a fireman, and then finally a driver. He remembers that his first union position was shed secretary. “It was my responsibility to make sure that the noticeboard was up to date,” he says.

As an activist Alex initially did not want to hold key posts locally as he wanted to be free to speak from the floor at meetings. However, the fact that he was a committed and able activist meant that he soon found himself taking on more responsibilities and was elected as secretary of the Gateshead No 1 NUR branch.

It is hard to conceive today just how powerful the Gateshead branch was. Gateshead was an important junction for industry, being just a short distance from Newcastle and the coal industry. At its height the branch had around 1,000 members. The impact of the union on local politics was strong. Gateshead council had 15 NUR members elected as councillors, controlling some of the key budgets.

“The influence that the union had in the local community was staggering,” remembers Alex’s eldest son Alec, who is a well known trade unionist in his own right. “We had all sorts of people coming and going and lots of local issues would be settled in discussions at our house,” he recalls.

BEER AND SANDWICHES AT NO 10

As an accomplished local and regional activist it was only a matter of time before Alex made his name nationally in the union. He served two periods on NUR national executive: 1965- 1967 and 1971-1973. After that he had a full time NUR job in Scotland before returning to the North East as a regional secretary, a position he held until he retired.

Alex’s first period in national office was shortly after Harold Wilson’s Labour government came to power in 1964, promising to halt the cuts on the railways that had been planned in the notorious Beeching report.

However, the cuts continued and promises of wage rises failed to materialise. In 1966 the union found itself in dispute and as a member of the negotiating committee Alex met Wilson and other government officials at No 10 Downing Street over “Beer and Sandwiches” in an effort to bring about a resolution.

Alex remembers fondly that after settling a crucial deal on freight liner terminals in 1967 he was invited by left-wing government minister Barbara Castle to the Ministry of Transport to celebrate, along with others on the negotiating committee. “It wasn’t beer and sandwiches that time, but the hard stuff,” Alex says, remembering how they toasted the end of a successful dispute with whisky and gin.

Then during Alex’s second spell on the executive, as chair of the negotiating committee, he found himself involved in another national dispute. As industrial action looked inevitable, the Conservative Heath government decided to use new legislation by which they could force a union to hold a ballot on planned action. It was the first time legislation like this had ever been used, and to the surprise of the Tories the membership held strong and voted in favour. As a result they won a big pay award and it was a long time before the legislation was invoked again.

The Miner’s Strike of 1984-85 had a big impact on Alex. The pits and associated industries formed a vital part of the fabric of the North East and the planned closures were set to decimate working class communities locally.

As the Thatcher government brought the full might of the state machine against the NUM, solidarity groups formed all over Britain to support the besieged miners. As a regional official in one of the mining heartlands Alex played an important role in organising practical solidarity. “In addition to collections and other forms of solidarity the thing that sticks in my mind is that we brought them huge turkeys on Christmas day”, recalls Alec.

“Alex was regional secretary of the NUR at the time of the strike and a very good supporter of the miners and the NUM. We had a good relationship and the NUR was very supportive.

“No members ever crossed a picket line and we had a lot of financial support from branches and individuals for which we will always be grateful,” he said.

“One of my proudest moments was when I was invited on to the main platform at the Durham Miners Gala,” Alex says. The gala is the largest miner’s gathering in Britain and has seen the cream of the labour movement address its annual gathering in its near 130 year history.

Since his retirement in 1987 Alex has remained active and continues to represent retired members in the region.

Alex believes that the unions never recovered from the blow they received in the Thatcher years. He says that he is disappointed that class solidarity doesn’t exist in the way that it once did. Nevertheless, he is proud of what the trade union movement has achieved in his lifetime and of the fact that he was able to make a contribution himself.

“Looking back you can see that improvements have been made in conditions in the workplace. “We made tremendous strides on pay, sick pay and holidays. Without the unions working conditions would be well below what they are now,” he says.