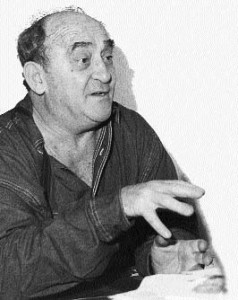 Steve Silver talked to him in the offices of the charity that he runs from London – Community HEART (Health, Education and Reconstruction Training) – about his involvement in the struggle against apartheid and the recently published report of South Africa’s Truth and Reconciliation Commission.

Dennis Goldberg’s political outlook was shaped by the rise of Nazism in the 1930s. He grew up in a left-wing, anti-fascist home and recalls, “We had battle maps of all of the fronts of World War Two up on the walls in our tiny little livingroom in Cape Town. We listened to the radio every night to find out what was happening. We were horrified every time the Nazi armies advanced and we rejoiced when they were defeated.”

In 1950 Dennis left school for university, the same year that the infamous Suppression of Communism Act came into force. Dennis’s parents’ home was raided but he did not become politically active himself until after he left university with a degree in engineering.

“I became active at the end of my studies. In South Africa that meant a lot of risk. Even legal anti-racist politics drew the attention of the Special Branch of the police. I lost a couple of jobs that way.”

Dennis was a member of the Congress of Democrats, which carried out work among white South Africans. He recalls, “You would knock on a door wanting to talk to people and you’d say ‘I’d like to talk to you about the pass laws.’

“‘We don’t like communists,’ would be the reply. It was automatic. If you opposed apartheid then you had to be a communist. The fact that some of us were is irrelevant.

In 1960 Dennis was detained for four months under the State of Emergency after the Sharpeville massacre and lost his job in the process. The failure of political progress by peaceful means led to a new strategy of armed struggle by the anti-apartheid forces and Dennis joined the African National Congress’s armed wing, Umkhonto we Sizwe (MK). He laughs as he recalls some of his poorer attempts as the weapons’ maker of the MK’s Western Cape Regional Command.

In May 1963 the government brought in a law allowing for detention without trial. People could be detained for 90 days until they had answered questions to the satisfaction of the police. “With no access to friends, family or lawyers it was a clear licence to torture.”

Dennis moved from the Western Cape to Johannesburg, where he joined the High Command of MK as its weapons’ maker. His stay was shortlived for the smallholding in Rivonia that was used as the underground headquarters of MK was raided by the police in July 1963 and Dennis and 11 other leaders were captured.

The Rivonia Trial, as it became known, received international attention as Nelson Mandela, Walter Sisulu, Dennis Goldberg and Govan Mbeki were sentenced to life imprisonment. The trial lasted eight months and the defendants expected the death penalty as they were charged with sabotage and conspiracy.

Dennis spent 22 years in prison, from 1963 to 1985. He finds it difficult to describe his treatment in prison, the petty acts carried out by prison officers to degrade and humiliate, cold hard floors, hunger. “Prison was a terrible experience. I’ve tried to write about it and I can’t understand how the hell we did survive it.”

In 1963, while in detention, Dennis briefly escaped but was recaptured by prison warders. His wife was detained and “was given a rather unpleasant time under interrogation”. He laughs and says “I’ve become so British saying it like that”.

In fact among other things the authorities had threatened to take their two children away and put them in separate orphanages.

Dennis’s wife and mother moved to England (his mother hailed from Hackney in London’s East End) to bring up their two children. On his release in 1985 he joined his family in London. “It was amazing to take part in a march and rally within weeks of arriving and have the column protected by the police.”

Dennis worked for the ANC in London and travelled to many countries campaigning against apartheid. He says that wherever he went there were racists who were prepared to justify apartheid, but the support for the anti-apartheid movement was incredible.

While he has criticisms of the Truth and Reconciliation Commission Dennisalso feels that it has tremendous strengths. He explains that the Commission was radically different from attempts at reconciliation in other countries in that it offered amnesty in exchange for the truth. He points out that officials had spent four years shredding and burning documents, so it was necessary to get people to talk.

“It was set up to help restore the dignity of the victims of the violence of apartheid and to try to bring the perpetrators of gross violations of human rights, who in the main were agents of apartheid, to an understanding of what they had done in order to help them as well. It’s one hell of a concept to say that the perpetrator needs rehabilitating as well.”

In terms of reconciliation Dennis feels that the Commission was very optimistic but that “this was a political decision passed by the first free parliament of South Africa. Revenge does not bring back the dead, does not take away the suffering, it simply perpetuates the violence.”

Dennis emphasises that there have been trials, that people have been convicted, and that many of the top officials who have not come forward to apply for amnesty could theoretically face trial if the state prosecution service can present a case. One case recently in KwaZulu Natal collapsed, showing how difficult it can be to get convictions. “Justice is not abstract, it is a matter of practicality and law. I have no doubt that many officials and [former]Cabinet Ministers in South Africa should stand trial. The question has to be, what best serves rebuilding our country? I think the conflict is both a judicial and a moral issue. It is a conflict between the needs of the individual who has suffered and those of the society as a whole.”

The recent arrest of General Pinochet makes the drawing of parallels between South Africa and Chile inevitable. Dennis feels that while politically there is little difference between De Klerk and Pinochet, legally Pinochet has a case to answer because there is strong evidence that can stand up in a court of law that he personally gave the direct commands for
the murder of many people who “disappeared”.

He also contrasts the blanket amnesty that took place in Chile with the individual applications for amnesty required in South Africa. Dennis argues that there was no possibility of Nuremberg type trials for the leadership of the apartheid regime. “The transfer of power would have taken much longer and the killings would have gone on much longer. It was purely pragmatic.

I don’t know if this is the right answer in South Africa but I believe that the intellectual rigour with which the Commission tried to act in advance of actually making its findings is important.”

The Commission also reported on human rights violations carried out by the ANC. Dennis explains that “We fought on ethical grounds as far as we could. In a situation of infiltration and double dealing we also did bad things. The only justification we have is that they occurred in the course of a struggle for something better, for a society where this kind of violence wasn’t inherent but alien to the society. Apartheid required violence.

“The greatest tragedy, and the Truth Commission confirms this, is that many white South Africans are still unprepared to acknowledge what happened under apartheid. De Klerk’s removal of his name from sections of the report doesn’t affect the thousands of pages of solid documentation and in that sense the Truth Commission has done an exceptionally good job. A commission can’t make reconciliation. What you hope is that knowing the truth enables people to live with it. Twenty-one thousand people gave evidence and they are part of the history of ending apartheid.”

To critics of the new South Africa Dennis points out that “tremendous advances have been made in education and healthcare. Free healthcare for pregnant women, free healthcare for children until their sixth birthdays for the first time ever in our country. There has been a complete restructuring of the way parliament works, the building of a new civil service and the election of local governments.

“We have a Mozambique development corridor to help build the economies of the region. Poverty is a terrible thing to overcome. People who thought we could transform South Africa into a paradise of equality between people, in racial and economic terms, overnight, were living with a romantic view of processes of social transformation.

“You have to have these romantic views if you are going to wage a successful struggle, but when it comes to transformation it is not so easy. Just think how long it takes to build schools, train teachers adequately, equip the schools. I’ve got a campaign to ship a million books to schools in South Africa. We actually need 20 million. The transformation will take 20 years to make a start, it just can’t be done in four years. There are weaknesses, but in the end we took on the state and we won. Nelson Mandela says in his autobiography that we are not yet free but we are free to be free in South Africa.”

The Truth and Reconciliation Commission

* In May 1995 an Act of Parliament led to the creation of the Truth and Reconciliation Commission. It was a contested piece of legislation and a compromise was reached whereby it focused on violations committed not only by the former state but by all parties in the conflict.

* The Commission had discretion over to whom it gave amnesty, even after they had given evidence, and only dealt with politically motivated crimes.

* Crimes committed outside South Africa were not taken into account.

* The Commission expressed its disappointment at former President F W de Klerk’s contribution, which it described as a “missed opportunity to take thereconciliation process forward”.

* All parties received some level of condemnation in the report including the churchand army.

* F W De Klerk succeeded in having some sections of the report that referred to him removed. The African National Congress failed to have references to it removed.

* The primary finding of the report was that the predominant portion of gross violations of human rights was committed by the former state through its security and law enforcement agencies, that from the late 1970s to the early 1990s the state was involved in extrajudicial killings of political opponents and that most notable among the groups that colluded with this was the Inkatha Freedom Party.

* The Commission published a whole series of recommendations as part of a “commitment to reconciliation and national unity”.