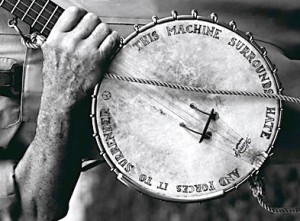 Last month I put up a blog post about how Pete Seeger had sung in a virtual concert for the Israeli environmentalist organisation the Arava Institute. In spite of the fact that he was singing from his New York home people who argue for a boycott of Israel tried to stop him. He went ahead with the concert anyway. (Pete’s banjo is pictured left, pic by Annie Leibovitz)

By coincidence, a week later the Morning Star published a feature article in the form of an Open Letter to Pete Seeger, by Karl Dallas, diametrically opposed to my position. The article said:

“The Arava Institute and its partner organisation the Jewish National Fund are complicit in this ethnic cleansing. They are planting fast-growing pine trees on the ruins of demolished Bedouin villages, destroying the ecology of the region…
Did you use the webcast to engage in dialogue with those who are carving up Palestine into a series of tiny bantustans separated by roads forbidden to the indigenous population of that colonised land? No, you did not…
Which side are you on today Pete? That’s what I and thousands of others throughout the world, who urged you to boycott this phoney “peace” initiative, want to know.”

You can read the full article here.

Seeing as it’s something I had already thought and written about I wrote a letter to the paper:

“Karl Dallas’ thought provoking open letter to Pete Seeger, opposing his singing for the online concert “With Earth and Each Other – A Virtual Rally for a Better Middle East,” raises an important question about how we deal with the Israeli-Palestinian conflict.
Do we co-operate with progressives inside Israel, or as some want, boycott the entire country?
I had never heard of the Arava Institute before Seeger sang for them, although I was aware of the efforts made by supporters of a boycott of Israel to stop the 91-year-old Seeger from singing and I did see the concert online.
From what I have since found out it turns out that the Israel-based Arava Institute is a teaching and research programme that builds co-operation between Arabs and Jews in order to help solve the region’s environmental problems.
It isn’t difficult to see why Seeger supported the event. There are numerous quotes to be found on the internet from environmentalists from Jordan, Palestine and Israel who have been students at the organisation and praise its work.
The idea that the Arava Institute has been involved with “ethnic cleansing” of the Bedouin people might fit with some people’s notions of zionism but is completely untrue.
In fact, graduates from Arava are working on organic waste disposal and methane gas production with the officially unrecognised Bedouin villages in the Negev.
Pete Seeger was right to play the concert.
The enemy is not a progressive environmentalist organisation that happens to be Israeli but the ultra-nationalists and religious zealots in both Israel and Palestine.
The British left would do well to follow his example.”

“Hard on the heels of Steve Silver’s defence of Pete Seeger’s performance in the Zionist Arava Institute virtual concert I received an email from Seth Morrison – chair of Friends of the Arava Institute – appealing for me to contribute funds via their “partner” organisation the Jewish National Fund (JNF).
The JNF was founded more than a century ago by the fifth Zionist Congress at Basle in 1901 for the purpose of land appropriation and development in Palestine.
The Jewish historian Ilan Pappe has effectively demolished the green credentials of the JNF – and, by extension of its junior partner the Arava Institute – describing it as “the principal tool for the Zionist colonisation of Palestine.”
Most of the illegal Israeli settlements in Palestine are on land appropriated by the JNF. Today the JNF directly controls 13 per cent of the land in Israel and effectively controls most of the remainder, renting and leasing only to Jewish citizens of the state in violation of the rights of non-Jewish Israeli citizens.
While the depredations of the JNF in Palestine are now revealed for all to see, its attacks upon Israeli non-Jewish citizens – such as the Bedouin in the Negev – directly implicate the Arava in the process of ethnic cleansing.
It has to be realised that the Bedouin are a predominantly nomadic people whose 45 Negev settlements are unrecognised and hence easy prey for the ethnic cleansers.
The Arava Institute has said nothing as the Bedouin village of al-Araqib has been destroyed and rebuilt by residents four times this summer in order to make way for a JNF park. It is a sad irony that one of these ethnically cleansed parks has been named after Martin Luther King, so deep into the Zionist psyche are planted the roots of its hypocrisy!”

Yesterday, the Star published my response:

“Understandably Karl Dallas’s response to my letter, which argued that Pete Seeger was right to play the virtual concert for Israel’s Arava Institute, is for him to defend his original “open letter”.
Karl sees the Arava Institute as an organisation that must have “zionist” put in front of it. And, if being “zionist” is not enough of a crime, the organisation is also guilty by its association with the Jewish National Fund.
Yet, I still cannot see the Arava Institute as being anything other than a progressive environmentalist organisation working with Jordanians, Palestinians and Israelis and which works on other things with Bedouin Arabs.
But the real issue is not about the nature of the little-known Arava Institute.
The real issue is whether you support boycott, divestment and sanctions on Israel and then have to justify that position, or whether you believe in working with progressives in Israel.
I think the latter way is the answer in striving for a two-state solution, the only realistic solution that offers justice for both peoples.
The use of the word “zionist” as an epithet ignores the fact that it is a nationalist movement which carries with it all that other nationalist movements do.
It harbours in its ranks reactionaries who would – and have done – all in their power to prevent the creation of a Palestinian state.
Yet it also harbours a progressive left wing which wants nothing but peace in the Middle East.
To see only the Jewish nationalist movement and the country that it brought into being as exclusively a malevolent force is a disturbing political position when it is never applied to any other nationalist movement or country.
In light of this, Karl’s reference to a “zionist psyche” makes the mind boggle.”

This entry was posted in Blog and tagged anti-Zionism, Antisemitism, BDS, Pete Seeger. Bookmark the permalink.