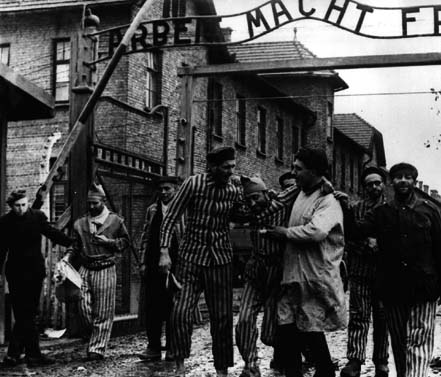 While I knew that today marks Holocaust Memorial Day, it only dawned on me during the day that this is actually the 10th anniversary of when it was first commemorated in Britain. I was made aware of this by a feature article in the Morning Star by Jean Turner of the Soviet Memorial Trust which mentions in passing that on that first Holocaust Memorial Day, in 2001, I had a feature article in the paper myself. You can read Jean’s excellent article here.

Of course, ten years on from anything begs the question, what has happened in that period of time? I won’t say much about the fears that people had of what the day might become, and whether those fears were borne out, because Jean deals with that very well in her piece. Holocaust Memorial Day has generally managed to commemorate the specificity of the unprecendented industrial slaughter of up to six million Jews and 500,000 Gypsies, while at the same time recognising the mass murder of others by the Nazis and also other acts of genocide before and since the Holocaust.

Auschwitz-Birkenau came to symbolise Nazi barbarism, and it is for this reason that 27 January, the anniversary of the day that the camp was liberated by the Soviet Union’s Red Army in 1945, was chosen to mark Holocaust Memorial Day.

The Soviet people paid a heavy price in the fight against fascism: some 27 million died in combat or through occupation at the hands of the Nazi butchers.

Nazism is often portrayed as an ideology that arrived in 1933 with Hitler’s rise to power and went in 1945 after Germany’s military defeat. However, antisemitism and racial hatred were there long before the Hitler regime came into existence and have also outlived it.

The Protocols of the Elders of Zion, a text published in Tsarist Russia at the turn of the 20th Century, which claimed that Jews secretly control the world, influenced Hitler and the Nazis. Originally it was used by the Black Hundred pogromists as part of their antisemitic propaganda campaign to try and prevent revolution in Russia.

Incredibly, versions of this hoary old forgery of supposed minutes of a Jewish cabal still sell well today, particularly in the Middle East and is even printed and distributed by some governments. It often goes hand in hand with Holocaust denial material.

Denial of the Holocaust began even before the end of the Second World War, when the Nazis blew up crematoria at extermination camps and tried to hide the extent of their crimes, before the territory fell into Allied hands. As the fascists reorganised they claimed that the Holocaust was Allied propaganda, that evidence was fabricated by the Soviet Union or the USA, or by Zionists to gain support for Israel.

As well as Holocaust denial there is a disturbing trend of Holocaust relativism which has gathered pace in the ten years since the first Holocaust Memorial Day. This is where people deny the unique character of the Nazis’ extermination programme and seek to compare it to crimes committed by other regimes.

In Eastern Europe there is a significant movement pushing to have crimes committed in the former socialist countries equated to those committed by the Nazis. Of course it is only right that any crimes should be remembered, but to have them lumped in with the Holocaust has significant political ramifications. It serves to both belittle the unprecedented heinous crimes of the Nazis, while at the same time elevating the gravity of the crimes committed under communist rule by equating them with the Nazis.

This is no mere academic debate and has already had significant political ramifications. In Lithuania there have been attempts to prosecute Holocaust survivors for crimes committed when they fought as anti-fascist partisans. The relativists try to compare the poison with its antidote.

Those same forces in the Baltic States behind the prosecution of former Soviet Jewish partisans are also pushing for a political settlement with regard to Communism and Nazism which equates the two as having committed double genocide. Fortunately an attempt to push this through the European Union last month failed.

The rallying call for the double genocide relativism is the Prague Declaration, signed by a mixture of former anti-communist dissidents and assorted right-wingers. There is an excellent new book that covers this called Freedom From Tyranny, by Phil Katz, which you can find here.

All democratic minded people need to be aware that what appears to be an assault on the legacy of communist rule is also in fact an assault on the memory of the Holocaust. And there seems no better day than Holocaust Memorial Day, the 66th anniversary of the liberation of Auschwitz by the Red Army, to point that out.