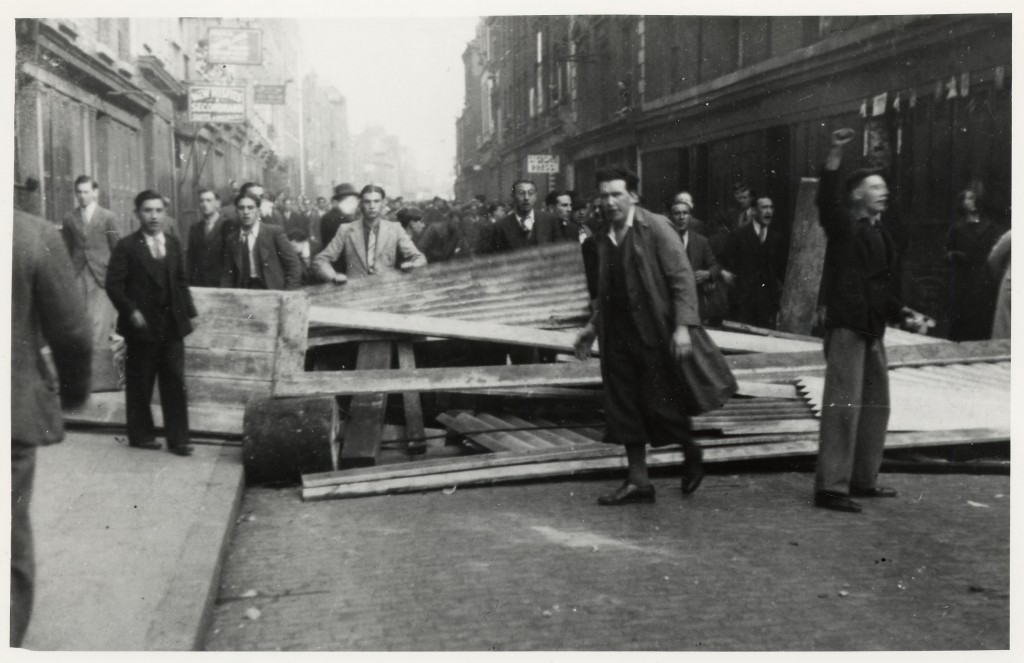 I have been itching to post more stuff related to Cable Street, more than the posts that you can find here

What has been holding me back is that I don’t want to write things that I have already put in the Searchlight pamphlet that I have written on the Battle of Cable Street. But, it seems that I have spent so much time immersed in Cable Street related research over the last few months that there are of course plenty of things that never made it into the pamphlet. So I will try and share some of these things in blog posts over the next couple of weeks.

One of the things that has struck me, and this is particularly the case with Jewish people, is that as soon as the Battle of Cable Street is mentioned they will tell you that their grandfather, father, aunt, uncle etc., was there on that day. The thing is that this is quite likely to be true. There were at least 250,000 people there on October 4 1936 and 75 years on they will have one hell of a lot of descendants.

My grandparents were also there, but my maternal grandfather, Hymie Hertz, wasn’t only in Cable Street that day, but every day, because that was where he was born and grew up. He was born in 1914 above his father’s bakery at 111 Cable Street, by the corner of Christian Street. This was the western end of the street where the barricades were erected to stop Mosley’s fascists from marching. He lived there until 1938 when he married my grandmother – who he first met at a Young Communist League dance – and moved out.

He had some great stories about growing up in Cable Street, some of which are in the Searchlight pamphlet, which you can buy here

A large section of that western “Jewish” end of the street was consumed by fire at the beginning of the blitz. While much of it must have been rebuilt at some point, where my grandfather lived there now stands no properties at all.

Hymie’s best friend was a man called Victor Davis. Victor’s parents were Russian and his surname originally was something like “Tonkanog”, I was never really certain of the spelling. He was a a fairly loud-mouthed character who, like many Jews in the East End at the time, was also a communist. Victor’s father was one of quite a significant number of Jewish Bolsheviks who fled Russia after the failed 1905 revolution and made their home in the East End. Except Victor’s father went back when Victor was a very young boy shortly after the successful 1917 revolution. The story is that Victor never heard from his father and had no idea what happened to him. It is hard to say, but it could well be the case that he disappeared in the purges.

Victor’s story isn’t the only one I heard relating to the Russian Revolution. My grandmother used to tell me that one day she was playing in the street with her friends in Mile End when a sailor grabbed one of their playmates off the street and disappeared with him. The children ran to the kid’s mother to tell her and she seemed unconcerned. Apparently the father was a Russian communist who, post-revolution, had come to take his boy home. The kids never saw their playmate again.

This entry was posted in Blog and tagged anti-fascist, Antisemitism, Battle of Cable Street, fascism, Mosley. Bookmark the permalink.

2 Responses to Cable Street, the East End and Bolshevism